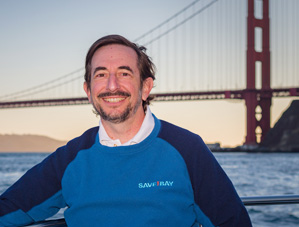 Save The Bay Executive Director David Lewis has been announced as the recipient of the 2017 Bay Nature Local Hero Award for Conservation Action.

He will be honored by the conservation nonprofit Bay Nature Institute alongside a “dynamic duo” in the field of citizen science, and an inspiring organizer of tree-planting initiatives in East Palo Alto. These awards are presented annually to recognize dedicated extraordinary contributions to the protection, stewardship, and understanding of the environment of the San Francisco Bay Area.

The award recipients will be honored at Bay Nature’s Local Hero Awards Dinner on Sunday, March 26, 2017, at the UCSF Mission Bay Conference Center in San Francisco.

David Lewis has been an effective advocate, tireless organizer, and articulate spokesperson for San Francisco Bay for more than 18 years. As executive director of Save The Bay, David has brought together diverse stakeholders, from public officials to grassroots activists, to forge regional solutions to the Bay’s most pressing challenges. He has helped build Save The Bay into a regional political force, culminating with his leadership of the successful campaign for Measure AA, the first ever voter-approved region-wide funding measure in the Bay Area. Passed in June 2016, Measure AA secures $500 million for the restoration of San Francisco Bay wetlands and shoreline over the next 20 years. David’s keen political instincts and strategic vision were critical in achieving this milestone victory for the Bay. Under David’s leadership, Save the Bay has also engaged thousands of Bay Area residents in volunteer habitat restoration projects around the Bay shoreline. David says, “It’s such a privilege to work for a healthy Bay with a large and growing community of people who care for this remarkable natural treasure and produce results that we can see and touch.”